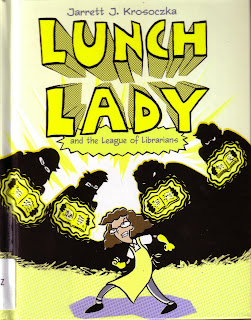 I update so rarely, that I pretty much only assume people are reading this blog if they stumbled upon it on a google search. Since I often do searches on "activity/activities" and the book title before book club, someone else must be doing them too. I have a goal of updating at least once a week until I have the chance to get through my backlog of notes on book clubs. Today I will not be talking about kids' book club though.

Recently (at the beginning of this year, so 10 months ago) I became the buyer for our library for children's graphic novels (well all of 700s but mainly graphic novels). I've always enjoyed them, but now I'm trying to be educated about it. Our collection of graphic novels was almost non-existent beyond Tin-Tin and Garfield, so I've been building up from scratch. I've been buying at a large pace for 10 months and the shelves are still bare. I take that as a success. If all my graphic novels were in, they wouldn't fit on the shelves currently allotted to them. They're always all checked out. It's also usually one of the messier (more heavily browsed) sections and they end up on the reshelve cart with great frequency. So as much as I buy and add, I haven't yet hit saturation, heavens I'm not keeping up with demand. But it's a fun challenge. And so today I review one of our newest acquisitions.

Lunch Lady and the League of Librarians by Jarrett J. Krosoczka
Knopf, 2009, available in a library binding
Lunch Lady Website

I of course must begin this review by saying that I am morally obligated to despise anything that portrays librarians as less than the beacons of hope and pillars of society that we are. Got that? Great, moving on.

I was thrilled to get this book because I love Jarrett Krosoczka, especially Punk Farm. Many is the time I've lost my voice after a particularly energetic storytime performance with those guys.

Inside artwork: it is still only those three colors, but you won't miss the rest of the palette. The resulting artwork is deceptively simple and striking. This book has a lot of shelf appeal, especially to both genders. (I have yet to convince a single boy to check out Babymouse.) There are a mix of sizes and styles of panels, from traditional (aka newspaper style) small square panels to double page spreads. The variety keeps it entertaining and allow for more flexibility in the storytelling which Krosoczka uses admirably.

Plot and writing: I started with the second one since for reasons known only to our distributor it arrived before the first volume despite being ordered at the same time. It worked just fine to read out of order which is always a huge plus in the library world, where we often hope to convince kids to take what is available no matter which volume it is. For the plot, once again we have evil librarians. They've taken all their fundraising money, stolen fundraising money from the cheerleaders (this librarian thinks our severely underfunded, having to take mandatory furlough, closed three days a week libraries could use the extra cash and doesn't see what is so evil about that) and are plotting world domination (a world run by librarians might work better, perhaps we should give it a try, still not evil). They've used the purloined fundraising money to buy deadly weapons (okay probably evil) and are setting out to sabotage the latest video game system so kids will read. And what is super cool (and not at all evil) is that their weapons are books that release "Book Beasts" such as the lion from the Chronicles of Narnia.

I'll end the plot description at the risk of being too spoilery. Let's just say I have ambiguous feelings about the end, but I know the kids will love it. The writing doesn't feel that he stretched for too epic, or kept it too simple, but just right. There is a lot of action, massive fight scenes, and plenty of humor. While most kids will like the action, I appreciated (and I know many kids who will as well) the small, almost throwaway, bits of referential humor.

Cross Appeal/ Age Appeal: This will appeal to readers of Babymouse, Sardine in Outer Space, etc. Primarily ages 5 to 10 depending on reading level. I think it will appeal to a wide range as it is neither too hard for the younger guys nor too babyish for the older ones. I can tell you that all of the library's copies were checked out within hours of hitting the shelves.

Overall Conclusion: This book gets an A. (It only didn't get an A+ because librarians aren't really evil.) If you're a librarian with a graphic novel collection, buy the two that are already out. Go ahead and order the next two he's announced. (I have.) If you're looking for a gift for a reluctant reader, try this.
Posted by Born Librarian at 4:18 PM No comments: